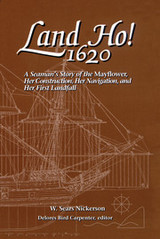 Land Ho! 1620: A Seaman's Story of the Mayflower, Her Construction, Her Navigation, and Her First Landfall
by W. Sears Nickerson
edited by Delores Bird Carpenter
Michigan State University Press, 1997
Paper: 978-0-87013-465-4

With an original 1931 press run of only seven hundred and fifty, surviving copies of Land Ho! 1620 are now either in archives or exist as valued collector's editions. Acclaimed by the Cape Cod Pilgrim Memorial Association in 1957 as "the most authentic, interesting, and best written book on the voyage of the Pilgrims and their lives," Nickerson's work is now available in this handsome paperback edition, complete with all original illustrations and maps. Nickerson scholar Delores Bird Carpenter updated all one hundred and seventy- nine annotations, checking them against original sources. In addition, she has prepared a new bibliography and an extensive, new introduction that places Land Ho! 1620 into its historical and historiographical context.
Divided into four parts, the first describes "the Voyage"; the second, told with the skill of a shipbuilder, describes "the Ship," which includes drawings of the deck plan, the passenger quarters, and the elevation and the sail plan. Also included in this section are discussions of the ship's speed, instruments, and personnel. The Third, "the backside of Cape Cod," addresses the problem of where the Mayflower first saw land, and its subsequent course. Nickerson concludes with "the Landfall and the Landing." Of great significance is his map, The Back Side of Cape Cod Today—1930 and Yesterday—1620.

TABLE OF CONTENTS
Contents
Acknowledgments
Editor's Introduction
Author's Introduction
1. The Voyage
2. The Ship
3. The Back Side of Cape Cod
4. The Landfall and the Landing
Bibliography
REQUEST ACCESSIBLE FILE