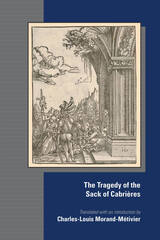 The Tragedy of the Sack of Cabrières
translated by Charles-Louis Morand-Métivier
Arizona Center for Medieval and Renaissance Studies, 2022
Cloth: 978-0-86698-644-1
A critical edition and the first English translation of the French play.

April 1542 saw a massacre of epic proportions in the Luberon, in southeastern France, of its Waldensian population, who had been peacefully living there after they settled in a few centuries before. This massacre foreshadowed the wars of religion, which tore apart the kingdom for almost forty years. The Tragédie du Sac de Cabrières is the only play devoted to these events. This is a critical edition and English translation of the French play. Three critical editions of the play have been published in 1927, 1928, and 1998, and this new edition complements the previous works. This is the first English translation of the play and makes it available to an international audience of scholars and students of the early modern period.

This edition “translates” the moment of the play's creation, the representation of the event, and its importance in the narrative of religious persecutions in sixteenth-century France. It explains how history is dramatized through the creation of the scenic story and scenic play of Cabrières. and how the specific retelling of the events of Cabrières makes this a tool of historical narration, thus allowing the audience to participate in the unfolding of history before their eyes. Therefore, they become part of history, because it is played before their eyes so that they can not only witness it but also propagate the glory of the martyrs for future generations. This is not only a translation and a work of literary scholarship, it is an analysis of the literary, political, and religious production of this period, and a multidisciplinary analysis of Waldensianism in southeastern France.
AUTHOR BIOGRAPHY
Charles-Louis Morand-Métivier is an associate professor of French at the University of Vermont.
TABLE OF CONTENTS


Acknowledgments
Introduction
The Waldensian Creed: From the Middle Ages to the Reformation
The Waldensians in Provence: Origins and History
Analyzing Cabrières: Religion, Community, Violence
Editing the Manuscript
Tragedy of the Sack of Cabrières
Bibliography