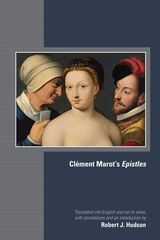 Clément Marot (1496–1544), a royal poet in Renaissance France who ushered in new verse forms and renewed existing ones, stands as one of the most important literary voices of the first half of the sixteenth century. Clément Marot’s Epistles represents a first attempt to offer a sustained English-language translation and critical edition of what is widely considered his most personal, historically relevant, and crowning verse form. Aiming for integrality and poetic precision, the volume translates and sets to verse all seventy-four of Marot’s epistles, employing the same meter and rhyme scheme used by the poet in the original compositions. Likewise focused on capturing Marot’s poetic voice, thus maintaining idiomatic and literary integrity, the resulting translation is an attempt to relate the playfulness and pathos of Marot’s verse, rendering it accessible to an anglophone public.

Beyond the more traditional verse epistles included in the primary base text, Marot’s authorized complete works from 1538, the volume also offers translations of the introductory prose epistles penned by Marot for his Adolescence clémentine of 1532 and the 1538 edition (Lyon, Dolet), as well as the coq-à-l’âne and other versified satirical epistles, the “artificial epistle” retelling of a popular medieval romance, and more. A robust critical apparatus includes ample footnotes, an extensive introduction, illustrations, a bibliography, a chronological table, and a concordance with the principal modern French-language editions of Marot’s epistles.

The book should appeal to English-speaking historians and literary scholars alike, as well as to poetry lovers, who will appreciate a new acquaintance with this distinctive voice from poetry’s past.
AUTHOR BIOGRAPHY
Clément Marot was a royal poet in Renaissance France. Robert J. Hudsonis associate professor of French at Brigham Young University, where he is also director of MARS (Medieval & Renaissance Studies). He specializes in the French lyrical tradition, particularly that of Renaissance France and the intersection between rhetoric and poetics, literary history, and anthropology.
TABLE OF CONTENTS