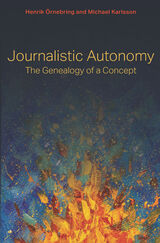 The idea that journalism should be independent is foundational to its contemporary understandings and its role in democracy. But from what, exactly, should journalism be independent? This book traces the genealogy of the idea of journalistic autonomy, from the press freedom debates of the 17th century up to the digital, networked world of the 21st. Using an eclectic and thought-provoking theoretical framework that draws upon Friedrich Nietzsche, feminist philosophy, and theoretical biology, the authors analyze the deeper meanings and uses of the terms independence and autonomy in journalism.

This work tackles, in turn, questions of journalism’s independence from the state, politics, the market, sources, the workplace, the audience, technology, and algorithms. Using broad historical strokes as well as detailed historical case studies, the authors argue that autonomy can only be meaningful if it has a purpose. Unfortunately, for large parts of journalism’s history this purpose has been the maintenance of a societal status quo and the exclusion of large groups of the population from the democratic polity. “Independence,” far from being a shining ideal to which all journalists must aspire, has instead often been used to mask the very dependencies that lie at the heart of journalism. The authors posit, however, that by learning the lessons of history and embracing a purpose fit for the needs of the 21st century world, journalism might reclaim its autonomy and redeem its exclusionary uses of independence.

AUTHOR BIOGRAPHY
Henrik Örnebring is Professor of Media and Communication in the Department of Geography, Media, and Communication at Karlstad University, Sweden. Dr. Örnebring has published widely on journalism, media history, and new media in anthologies and scholarly journals and his most recent book is Newsworkers: Comparing Journalists in Six European Countries. He is the Editor-in-Chief of the Oxford Research Encyclopedia of Journalism Studies.

Michael Karlsson is Professor of Media and Communication in the Department of Geography, Media and Communication at Karlstad University, Sweden. He has primarily published on issues pertaining to the digitalization of journalism. His is co-editor of Rethinking Research Methods in an Age of Digital Journalism. He is a Senior Editor of the Oxford Research Encyclopedia of Journalism Studies.
REVIEWS
“This  book  represents  excellent,  path-breaking  work.”—Ryan J. Thomas, Missouri School of Journalism, serves on the editorial boards of the  Journal of Media Ethics, Digital Journalism, and Journalism & Mass Communication Educator


“This thoughtful, provocative book will be well-cited by not only US and European scholars but scholars around the globe.”—Linda Steiner, University of Maryland, coeditor of Front Pages, Front Lines: Media and the Fight for Women’s Suffrage


"Journalists jealously defend their autonomy from owners, advertisers, bosses, politicians, government, and even their audiences and their tools. Ornebring and Karlsson provide an invaluable genealogy of this devotion to autonomy. Their wise and timely account shows that viable autonomy is served not by building unbreachable walls around journalism but by maintaining permeable membranes. Anyone trying to understand the mess that journalism is in today should read this book."—John Nerone, University of Illinois, author of The Media and Public Life: A History