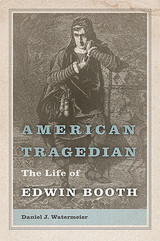 When John Wilkes Booth assassinated President Abraham Lincoln, his older brother Edwin was devastated. A leading stage star, Edwin Booth thought his career had ended. But with the support of countless theatergoers, over the next thirty years Booth would overcome the shadow of John Wilkes’s infamy and steadily advance a reputation as America’s greatest-ever Shakespearean actor, the American tragedian par excellence.
Daniel J. Watermeier has, through decades of tireless research paired with his own sharp insight, put together the most complete Edwin Booth biography to date. Drawing on a wealth of archival materials and contemporary theatrical scholarship, American Tragedian: The Life of Edwin Booth gives more attention than previous biographies to Booth’s apprentice and journeyman years; his rise in antebellum America to stardom with a new, acclaimed style of acting; his work as an innovative theater builder and theatrical producer; his several foreign tours; and his nationwide tours in the late 1880s. It also addresses Booth’s critical reception in dozens of cities in America and abroad and situates his professional activities within the events and trends of the time.
As interesting as it is informative, Watermeier’s book offers an in-depth look at the triumphal career and tumultuous life of one of the American stage’s most celebrated figures.
AUTHOR BIOGRAPHY
Daniel J. Watermeier is the author of numerous articles and books on Booth and American theater and drama, including Edwin Booth’s Performances and The History of North American Theater (with Felicia Hardison Londré). In 2003 he was elected to the College of Fellows of the American Theatre for his contributions to the history of the American stage.
REVIEWS
“One may say that any life or any company is without consequence, but well-done biographies and performance histories, such as Edwin Booth and American Tragedian, remind theatre historians that, without them, further histories will also suffer in consequence.”—Journal of Dramatic Theory and Criticism


“Scrupulously researched and documented, accessibly written, and complete in scope. This comprehensive biography presents the clearest picture yet of its endlessly compelling and maddeningly elusive hero.”—The Journal of American Drama and Theatre


“Watermeier’s study of the preeminent actor of the nineteenth-century American theatre will doubtless be an essential biography for years to come.”—Theatre Survey