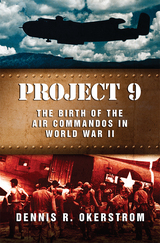 Project 9: The Birth of the Air Commandos in World War II is a thoroughly researched narrative of the Allied joint project to invade Burma by air. Beginning with its inception at the Quebec Conference of 1943 and continuing through Operation Thursday until the death of the brilliant British General Orde Wingate in March 1944, less than a month after the successful invasion of Burma, Project 9 details all aspects of this covert mission, including the selection of the American airmen, the procurement of the aircraft, the joint training with British troops, and the dangerous night-time assault behind Japanese lines by glider.

Based on review of hundreds of documents as well as interviews with surviving Air Commandos, this is the history of a colorful, autonomous, and highly effective military unit that included some of the most recognizable names of the era. Tasked by the General of the Army Air Forces, H. H. “Hap” Arnold, to provide air support for British troops under the eccentric Major General Wingate as they operated behind Japanese lines in Burma, the Air Commandos were breaking entirely new ground in operational theory, tactics, and inter-Allied cooperation. Okerstrom’s in-depth research and analysis in Project 9 shed light on the operations of America’s first foray into special military operations, when these heroes led the way for the formation of modern special operations teams such as Delta Force and Seal Team Six.
AUTHOR BIOGRAPHY
Dennis R. Okerstrom is Professor of English at Park University, a certified flight instructor, and the author of four previous books including The Final Mission of Bottoms Up: A World War II Pilot’s Story (University of Missouri Press). He owns and flies a restored 1942 Army scout plane and is the recipient of numerous awards for scholarship and teaching. He lives in Independence, Missouri. The American Military Experience Series, edited by John C. McManus.
REVIEWS
The Best Air Power History Book Award Winner for 2014

“This a splendid book about a little-reported-on corner of World War II geography and forces engaged in a do-or-die situation in Burma and India in 1943-1944. The book deals with some unforgettable figures. General ‘Hap’ Arnold and Admiral Lord Louis Mountbatten lead the list, with brilliant, if eccentric, British Brigadier Orde Wingate close behind. Wingate’s scheme for taking the fight to the Japanese in Burma was the catalyst for the formation of the U.S. Army Air Forces ‘Air Commandos.’”—Air Power History