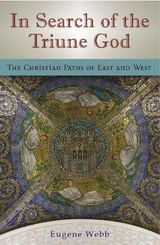 Under the broad umbrella of the Christian religion, there exists a great divide between two fundamentally different ways of thinking about key aspects of the Christian faith. Eugene Webb explores the sources of that divide, looking at how the Eastern and Western Christian worlds drifted apart due both to the different ways they interpreted their symbols and to the different roles political power played in their histories. Previous studies have focused on historical events or on the history of theological ideas. In Search of the Triune God delves deeper by exploring how the Christian East and the Christian West have conceived the relation between symbol and experience.

This difference of focus has led to a large range of fundamental differences in many areas not only of theology but also of religious life. Webb traces the history of the pertinent symbols (God as Father, Son of God, Spirit of God, Messiah, King, etc.) from the Hebrew Bible and New Testament through patristic thinkers and the councils that eventually defined orthodoxy. In addition, he shows how the symbols, interpreted through the different cultural lenses of the East and the West, gradually took on meanings that became the material of very different worldviews, especially as the respective histories of the Eastern and Western Christian worlds led them into different kinds of entanglement with ambition and power.

Through this incisive exploration, Webb offers a dramatic and provocative new picture of the history of Christianity.

Eugene Webb is Professor Emeritus of the Henry M. Jackson School of International Studies at the University of Washington and is the author of numerous books, including Worldview and Mind: Religious Thought and Psychological Development (University of Missouri Press).

TABLE OF CONTENTS
Contents
Acknowledgments
Introduction
Chapter 1. Divine Sonship in Israel
Chapter 2. The New Testament Narrative of Son and Spirit and Its Ancient Antecedents
Chapter 3. From Symbols to the Formulation of Doctrine in the Creeds
Chapter 4. Augustine and a New Symbolism for the Western God
Chapter 5. The Breach between East and West
Chapter 6. The Aftermath in the West: God and Power
Chapter 7. The Aftermath in the East: Understanding Union with God in Christ
Chapter 8. The Great Divide
Notes
Bibliography
Index
REQUEST ACCESSIBLE FILE