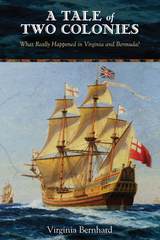 In 1609, two years after its English founding, colonists struggled to stay alive in a tiny fort at Jamestown.John Smith fought to keep order, battling both English and Indians. When he left, desperate colonists ate lizards, rats, and human flesh. Surviving accounts of the “Starving Time” differ, as do modern scholars’ theories.
Meanwhile, the Virginia-bound Sea Venture was shipwrecked on Bermuda, the dreaded, uninhabited “Isle of Devils.” The castaways’ journals describe the hurricane at sea as well as murders and mutinies on land. Their adventures are said to have inspired Shakespeare’s The Tempest.
A year later, in 1610, the Bermuda castaways sailed to Virginia in two small ships they had built. They arrived in Jamestown to find many people in the last stages of starvation; abandoning the colony seemed their only option. Then, in what many people thought was divine providence, three English ships sailed into Chesapeake Bay. Virginia was saved, but the colony’s troubles were far from over.
Despite glowing reports from Virginia Company officials, disease, inadequate food, and fear of Indians plagued the colony. The company poured thousands of pounds sterling and hundreds of new settlers into its venture but failed to make a profit, and many of the newcomers died. Bermuda—with plenty of food, no native population, and a balmy climate—looked much more promising, and in fact, it became England’s second New World colony in 1612.
In this fascinating tale of England’s first two New World colonies, Bernhard links Virginia and Bermuda in a series of unintended consequences resulting from natural disaster, ignorance of native cultures, diplomatic intrigue, and the fateful arrival of the first Africans in both colonies. Written for general as well as academic audiences, A Tale of Two Colonies examines the existing sources on the colonies, sets them in a transatlantic context, and weighs them against circumstantial evidence.
From diplomatic correspondence and maps in the Spanish archives to recent archaeological discoveries at Jamestown, Bernhard creates an intriguing history. To weave together the stories of the two colonies, which are fraught with missing pieces, she leaves nothing unexamined: letters written in code, adventurers’ narratives, lists of Africans in Bermuda, and the minutes of committees in London. Biographical details of mariners, diplomats, spies, Indians, Africans, and English colonists also enrich the narrative. While there are common stories about both colonies, Bernhard shakes myth free from truth and illuminates what is known—as well as what we may never know—about the first English colonies in the New World.
AUTHOR BIOGRAPHY

Virginia Bernhard, Professor Emerita of History at the University of St. Thomas in Houston, Texas, is the author or editor of seven books. Her most recent book is Slaves and Slaveholders in Bermuda, 1616–1782 (University of Missouri Press). She lives in Houston.

“Virginia Bernhard’s engaging, scholarly account of Bermuda and Virginia in the two decades after the Virginia Company’s genesis in 1606 is consonant with the historiographical drift moving American origins southward. But Bermuda serves as more than a stepping-stone to Virginia in Bernhard’s book, for her methodology elucidates both colonies. Bernhard’s definitive account of early Virginia and Bermuda should demonstrate Atlantic history’s utility to undergraduates and scholars alike.”—The Journal of Southern History

“Drawing on new research and her own extensive knowledge of early Virginia and Bermuda, Virginia Bernhard elucidates the colonies' interwoven histories. Along the way, she solves many of the conundrums that have long perplexed scholars and general readers. This is a rich, lively, and reliable narrative and an important contribution to Atlantic studies.”—Alden T. Vaughan, author of Transatlantic Encounters: American Indians in Britain, 1500–1776


“Virginia Bernhard, who has previously published an outstanding book about slavery on Bermuda, offers the reader a gripping story. She relates the fascinating tale of these two critical locales in England’s early efforts to build a successful colonial empire. I found myself eagerly turning the pages, particularly because she skillfully guides the reader back and forth between the two colonies, revealing how so many of the people involved were instrumental to both settlements. Her portrayal of the intrigue, the rapid development of factional disputes on both Bermuda and at Jamestown, is well done. The focus is properly on the personalities and how individual decisions made a significant difference.”—Larry Gragg, author of The Quaker Community on Barbados: Challenging the Culture of the Planter Class

TABLE OF CONTENTS
List of Maps
Acknowledgments
Introduction
1. The Wreck of the Sea Venture
2. Bad Blood at Jamestown
3. Troubles in Paradise
4. The Starving Time
5. Deliverance
6. A Tale of Two Colonies
7. The Confluence of Three Cultures
Notes
Index
REQUEST ACCESSIBLE FILE