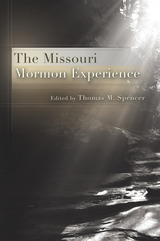 The Mormon presence in nineteenth-century Missouri was uneasy at best and at times flared into violence fed by misunderstanding and suspicion. By the end of 1838, blood was shed, and Governor Lilburn Boggs ordered that Mormons were to be “exterminated or driven from the state.”
The Missouri persecutions greatly shaped Mormon faith and culture; this book reexamines Mormon-Missourian history within the sociocultural context of its time. The contributors to this volume unearth the challenges and assumptions on both sides of the conflict, as well as the cultural baggage that dictated how their actions and responses played on each other.
Shortly after Joseph Smith proclaimed Jackson County the site of the “New Jerusalem,” Mormon settlers began moving to western Missouri, and by 1833 they made up a third of the county’s population. Mormons and Missourians did not mix well. The new settlers were relocated to Caldwell County, but tensions still escalated, leading to the three-month “Mormon War” in 1838—capped by the Haun’s Mill Massacre, now a seminal event in Mormon history.
These nine essays explain why Missouri had an important place in the theology of 1830s Mormonism and was envisioned as the site of a grand temple. The essays also look at interpretations of the massacre, the response of Columbia’s more moderate citizens to imprisoned church leaders (suggesting that the conflict could have been avoided if Smith had instead chosen Columbia as his new Zion), and Mormon migration through the state over the thirty years following their expulsion.
Although few Missourians today are aware of this history, many Mormons continue to be suspicious of the state despite the eventual rescinding of Governor Boggs’s order. By depicting the Missouri-Mormon conflict as the result of a particularly volatile blend of cultural and social causes, this book takes a step toward understanding the motivations behind the conflict and sheds new light on the state of religious tolerance in frontier America.
AUTHOR BIOGRAPHY
Thomas M. Spencer is Director of Honors Student Affairs, The Sandra and Jack Pine Honors College at Eastern Illinois University. He is the author of The St. Louis Veiled Prophet Celebration: Power on Parade, 1877–1995 and editor of The Other Missouri History: Populists, Prostitutes, and Regular Folk (both available from the University of Missouri Press).
TABLE OF CONTENTS

Introduction: "Persecution in the Most Odious Sense of the Word" by Thomas M. Spencer
The Missouri Context of Antebellum Mormonism and Its Legacy of Violence by Kenneth H. Winn
Reassessing Joseph Smith's "Appointed Time for the Redemption of Zion" by Ronald E. Romig and Michael S. Riggs
Mormonism, Millenarianism, and Missouri by Grant Underwood
The Great Temple of the New Jerusalem by Richard O. Cowan
The Mormon Temple Site at Far West, Caldwell County, Missouri by Alexander L. Baugh
"Was This Really Missouri Civilization?": The Haun's Mill Massacre in Missouri and Mormon History by Thomas M. Spencer
But for the Kindness of Strangers: The Columbia, Missouri, Response to the Mormon Prisoners and the Jailbreak of July 1839 by Jean A. Pry and Dale A. Whitman
Lessons Learned: The Nauvoo Legion and What the Mormons Learned Militarily in Missouri by Richard E. Bennett
Between the Borders: Mormon Transmigration through Missouri, 1838–1868 by Fred E. Woods