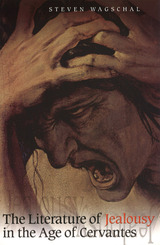 Frequent and complex representations of jealousy in early modern Spanish literature offer symbolically rich and often contradictory images. Steven Wagschal examines these occurrences by illuminating the theme of jealousy in the plays of Lope de Vega, the prose of Miguel de Cervantes, and the complex poetry of Luis de Góngora. Noting the prevalence of this emotion in their work, he reveals what jealousy offered these writers at a time when Spain was beginning its long decline.

Wagschal examines jealousy not only in canonical texts—The Jealous Old Man from Extremadura, The Commanders of Cordoba—but also in less-studied writings such as Lope de Vega’s Jealous Arminda and In Love but Discreet and Góngora’s “What of the Tall Envious Mountains.” Through close analysis of numerous works, read in relation to one another, he demonstrates how the rhetorical elaboration of jealousy is linked to the ideological makeup of the texts—complicating issues of race, class, gender, morality, epistemology, and aesthetics—and proposes that the theme of jealousy offered a means for working through political and cultural problems involving power.
Grounding his study in the work of thinkers ranging from Vives and Descartes to Freud and DeSousa, Wagschal also draws on classical antiquity to unravel myths that impinge upon the texts he considers. By showing that the greatest hyperbole of each of these writers is a representation of jealousy, he calls for a reconsideration of an era’s literary giants, arguing not only for a reinterpretation of settled views on Cervantes but also for a reconsideration of Góngora’s role in the development of modern European aesthetics.
With its fresh insights into the interrelationships among literature, art, and society, Wagschal’s study offers background theory for analyzing the emotions in literature and is the first book to treat an emotion in any national literature from the perspective of contemporary philosophy of mind. With its cogent insights into the jealous mind, it raises issues relevant both to the early modern period and to our contemporary world.
AUTHOR BIOGRAPHY

Steven Wagschal is Assistant Professor in the Department of Spanish and Portuguese at Indiana University. He lives in Bloomington, Indiana.

“His readings are always careful, insightful, and stimulating. . . . His study should be of interest to anyone who is concerned with the representation of emotions in literature.” —Frederick de Armas, author of Cervantes, Raphael, and the Classics