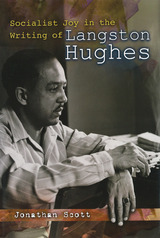 One of the foremost African American writers of his generation, Langston Hughes waged a tireless campaign against racial oppression that defied the anticommunist currents of cold war America. Socialist Joy in the Writing of Langston Hughes examines his writing during this period to show that his approach to the main philosophical currents of the era was original, dynamic, and systematic in ways that most scholars have yet to appreciate.
Jonathan Scott has written the first book-length study to analyze the extraordinary range of Hughes’s creative output, showing that his unassailable reputation as one of America’s finest “folk poets” barely scratches the surface of his oeuvre. Scott offers a robust account of the relations between Hughes and political activism to show that Hughes’s direct involvement with the U.S. socialist movement of the 1920s and 1930s was largely responsible for the variety of his writing. Scott also contends that the goal of overthrowing white oppression produced a “socialist joy” that would express itself repeatedly in Hughes’s work during the anticommunist crusades of the 1950s and 1960s.
In his provocative study, Scott explores four areas of Hughes’s intellectual work: his relationship with Afro-Caribbean arts, Soviet Russia, and the Harlem Renaissance; his postwar newspaper writing for the African American press; his extensive cultural work as an anthologist; and his writings for young people. Through these analyses, Scott proposes the concept of “red, white, and black” as an alternative paradigm for appreciating Hughes in particular and the American scene in general.
Scott views Hughes not simply as a great author but as an American working-class intellectual trickster whose eccentric projects require a redefinition of the very concept of authorship. By focusing on Hughes’s intellectual method, Scott also contests the notion of reducing all African Americans to one undifferentiated social status beneath that of any class within the white oppressing group—a hallmark of racial oppression that has diminished, in the U.S. academy, Hughes’s international status.
As Scott persuasively argues, it is only through an understanding of Hughes’s literary method that we can undertake a thorough account of his prolific production during the cold war era. His book situates Hughes’s life and work in their proper contexts, both reconfirming Hughes’s reputation as an intellectual of the American Left and establishing his long-denied place in American studies as the most well-rounded writer of his time.
AUTHOR BIOGRAPHY
Jonathan Scott is Assistant Professor of English at Al-Quds University in Jerusalem. He lives in Abu Dis, Palestine.
REVIEWS

“A highly original and substantial—in many cases, unprecedented—contribution to Hughes scholarship in particular and American studies more generally. The most theoretically sophisticated critical study of Hughes to date.”—Christopher C. De Santis, editor of Langston Hughes and the Chicago Defender


“This book will have a revolutionary effect on Hughes scholarship. The most satisfying work I’ve read in a long time.”—Leslie Sanders, coeditor of The Collected Works of Langston Hughes

"This is a fine book, full of elucidation of the work of one of the twentieth century's strongest and most underestimated poets."—Race and Class