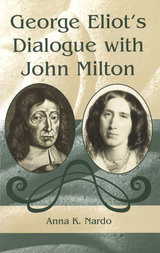 In George Eliot’s Dialogue with John Milton, Anna K. Nardo details how Eliot reimagined Milton’s life and art to write epic novels for an age of unbelief. Nardo demonstrates that Eliot directly engaged Milton’s poetry, prose, and the well-known legends of his life—transposing, reframing, regendering, and thus testing both the stories told about Milton and the stories Milton told.
In Romola and Middlemarch, Eliot’s contemporary audience would immediately have recognized in her heroines’ stories the plight of Milton’s daughters—enlisted as readers for a blind poet and scholar. By evoking the well-known legends of Milton’s life in these novels, Eliot places Milton in dialogue with himself in order to imagine new possibilities. In Romola, a daughter uses what she has learned from one Miltonic father to liberate herself from subjugation to the other, and in Middlemarch, Eliot tests Milton’s fundamental assumptions about gender and knowledge by evoking, then reframing scenes from his life and his epic Paradise Lost.
This strategy for establishing a dialogue with authoritative discourse, which Eliot evolved in midcareer, is complex and elegant. Eliot’s first full-length novel, however, poses a direct challenge to the pastoral assumptions of Milton’s “L’Allegro” and “Il Penseroso”—a challenge that she extends to the theology of Milton’s epic of a lost pastoral paradise. In Adam Bede, Eliot summons Miltonic patterns into situations that expose their absence, leaving not the denial of these patterns, but their echo. Having separated Milton’s characteristic patterns of choice from his theology, Eliot then began to experiment with transformations of the Miltonic hero. By reimagining the story of the virtuous Lady of Comus, Eliot discovers the possibility for a heroic deliverance for the beleaguered heroine of The Mill on the Floss. In Felix Holt and Daniel Deronda, she first characterizes a male protagonist as a Miltonic hero, and then confronts her female, rather than her male, protagonist with the trials faced by that hero.
In these complex transformations, we see Eliot’s strenuous and lifelong dialogue with Milton—a dialogue that liberated Eliot’s imagination. The author shows that Eliot opens the authoritative discourse by and about Milton to new possibilities envisioned by a towering female intellect. Scholars of both seventeenth-century and nineteenth-century British literature, especially those specializing in Eliot or Milton, as well as theorists engaged in the ongoing debate about intertextuality, will find this book of great interest.
AUTHOR BIOGRAPHY
Anna K. Nardo is Alumni Professor of English at Louisiana State University in Baton Rouge. She is the author of Milton’s Sonnets and the Ideal Community and The Ludic Self in Seventeenth-Century English Literature.