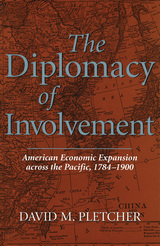 Like its predecessor, this important new work is focused on the connection between trade and investment on the one hand and U.S. foreign policy on the other. David Pletcher describes the trade of the United States with the Far East, the islands of the Pacific, and the northwest coast of North America from 1784 (the year of the first American trading expedition to China) to 1844 (the year of the first trade treaty with China, followed immediately by the U.S. acquisition of Oregon and California). He then traces the growth of trade and investment in Alaska, Hawaii, and the South Pacific from 1844 to 1890 and proceeds to do the same for China, Japan, and Korea. In the ensuing chapters, Pletcher covers the 1890s, including the annexation of Hawaii, the Sino-Japanese War, the acquisition of the Philippines, and the Open Door policy in China.

He concludes that the American expansion across the Pacific and into the Far East was not a deliberate, consistent drive for economic hegemony but a halting, experimental, improvised movement, carried out against determined opposition and indifference and dotted with setbacks and failures. Providing his own judgments about the wisdom and effectiveness of America's new endeavors, Pletcher summarizes the problems and handicaps involved, demonstrating that errors of the twentieth century were at least partly the result of poor preparation in the 1880s and 1890s.

Touching on every place where Americans undertook significant economic activity, The Diplomacy of Involvement will be an important aid for seasoned scholars, as well as an excellent introduction for the novice.

David M. Pletcher is Professor Emeritus of History at Indiana University in Bloomington. He is the author of many books, including The Diplomacy of Trade and Investment: American Economic Expansion in the Hemisphere, 1865-1900 (University of Missouri Press).

"An excellent work of historical scholarship. A good companion to his earlier work, The Diplomacy of Trade and Investment: American Economic Expansion in the Hemisphere, 1865- 1900. It is well-organized, clearly written, thoroughly researched, and subtly argued. As such, it will become the definitive work on the subject of American economic expansion into the Pacific in the nineteenth century."—William H. Becker