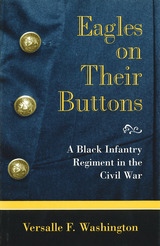 Eagles on Their Buttons is a fascinating examination of the Fifth Regiment of Infantry, United States Colored Troops—the Union Army's first black regiment from Ohio. Although the Fifth USCT was one of more than 150 regiments of black troops making up more than 10 percent of the Union Army at the end of the war, it was unique. The majority of USCT regiments were made up of freed men who viewed the army as an escape from slavery and a chance to take up arms against their former masters. The men serving in the 5th USCT, however, were freemen who were raised in a northern state and saw serving in the army both as a way to gain equal rights under the law and as an opportunity to prove their worth as men.

Because historians have written little on this subject, many Americans believe that African Americans simply received their freedom with the Emancipation Proclamation. They know nothing about the struggles these courageous people endured to gain their independence. Now, by incorporating personal documents, letters, diaries, and official records, Eagles on Their Buttons sheds important new light on this unfamiliar aspect of the Civil War. Versalle Washington shows what caused the soldiers in the Fifth USCT to join their regiment, what sort of men they were, and how they fought and lived as African American soldiers under white officers. He discusses the regiment's service, addressing its role in the siege of Petersburg, the battle of Chapin's Farm, and the capture of Fort Fisher and the port of Wilmington. Washington also looks at what effects the soldiers' service had in terms of societal changes following the Civil War.

Eagles on Their Buttons is a fresh contribution to Civil War scholarship and will be welcomed by professional historians and amateur Civil War buffs alike.

This book is part of the University of Missouri Press' Shades of Blue and Gray series.

Versalle F. Washington is a Major in the United States Army, serving at Fort Leavenworth, Kansas.

REVIEWS
"A fresh contribution to Civil War and African-American scholarship and will be a welcome addition to the libraries of professional and amateur historians alike."—The Journal of Military History