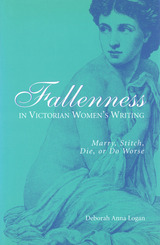 The Angel-in-the-House is an ideal commonly used to define sexual standards of the Victorian Age. Although widely considered to be the cultural "norm," the Victorian Angel, revered for her morality, domestic virtue, and dedication to the family, is more frequently depicted in the literature of the time as an anomaly. In fact, a primary concern of Victorian literature appears to be the many exceptions to this unattainable ideal, which, according to the period's madonna-or-harlot polarity, casts these exceptions as fallen women. Deborah Anna Logan presents an unusual study of this image of fallenness in Victorian literature, focusing on the links among angelic ideology, sexuality, and, more important, social deviance.

Fallenness, according to Logan, does not refer simply to women who have sexually strayed from morality; besides prostitutes, the ranks of the fallen include unmarried mothers, needlewomen, alcoholics, the insane, the childless, the anorexic, slaves, and harem women. All of these women are presented as fallen because they fail to conform to sexual and social norms. In some cases, economic need was responsible for women's failure to uphold the ideals of domesticity and motherhood that were so revered in nineteenth- century society. But other examples illustrate the power of angelic ideology to construct deviancy even out of nonsexual behaviors.

Logan's study is distinguished by its exclusive focus on women writers, including Charlotte Brontë, George Eliot, Elizabeth Gaskell, Harriet Martineau, Elizabeth Barrett Browning, Florence Nightingale, Sarah Grand, and Mary Prince. Logan utilizes primary texts from these Victorian writers as well as contemporary critics such as Catherine Gallagher and Elaine Showalter to provide the background on social factors that contributed to the construction of fallen-woman discourse. Examining novels, short stories, poetry, and travel journals, Logan successfully demonstrates the rich links between these writers and their fallen characters--links in which, for women, even the act of writing becomes a type of fallenness.

Fallenness in Victorian Women's Writing is a significant and original contribution to the study of literature. Logan's thoroughly researched and attractively presented book will be of special interest to students of Victorian and women's studies, as well as to the general reader.

Deborah Anna Logan is an Assistant Professor of Victorian Studies in the Department of English at Western Kentucky University in Bowling Green.