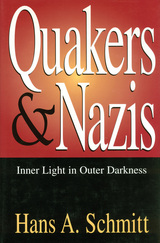 Why the title Quakers and Nazis, not Quakers against Nazis? Was not hostility part of the interaction between the two groups? On the contrary, Hans A. Schmitt's compelling story describes American, British, and German Quakers' attempts to mitigate the suffering among not only victims of Nazism but Nazi sympathizers in Austria and Lithuania as well.

With numerous poignant illustrations of the pressure and social cost involved in being a Quaker from 1933 to 1945, Quakers and Nazis: Inner Light in Outer Darkness reveals a facet of Nazi Germany that is entirely unknown to most people. The book focuses on the heroic acts foreign and German Quakers performed under the Nazi regime, offering fully documented and original information regarding the Quakers' commitment to nonviolence and the relief of the victims.

Schmitt's narrative reveals the stress and tension of the situation. How should a Quaker behave in a meeting for worship with a policeman present? Spies did not stop Friends in worship services from openly criticizing Hitler and Göring, but Nazis did inflict torment on Friends. Yet Friends did not, could not, respond in like manner. Olga Halle was one Friend who worked to get people, mostly Jews, out of Germany until America entered the war. When emigration was outlawed, twenty-eight were stranded. Years later her distress was still so deep that even on her deathbed she recited their names.

Schmitt reminds us that virtually all the Berlin Quakers secreted Jews throughout the war. He shows how these brave Quakers opposed the Nazis even after they lost their jobs and had been harassed by the Gestapo. Risking their lives, the Friends persisted in their efforts to alleviate suffering.

At a time when the scholarly world is divided as to whether all Germans knew and approved of the Final Solution, this book makes a valuable contribution to the discussion. Quakers—despite their small numbers—played, and continue to play, an important role in twentieth-century humanitarian relief. Quakers and Nazis: Inner Light in Outer Darkness, a study of how Friends performed under the extreme pressure of a totalitarian regime, will add significantly to our general understanding of Quaker and German history.

Hans A. Schmitt is Professor Emeritus of History at the University of Virginia. He is the author or editor of several books, including Lucky Victim: An Ordinary Life in Extraordinary Times.

"There is no comparable published book or even a major article on the Quaker response to the rise of Nazi Germany. Quakers and Nazis is thoroughly researched and clearly written. The result is a book to read, savor, and enjoy."—J. William Frost, author of The Quaker Family in Colonial America: A Portrait of the Society of Friends