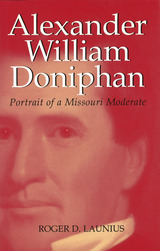 Alexander William Doniphan (1808-1887)--Missouri attorney, military figure, politician, and businessman--is one of the most significant figures in antebellum Missouri. From the 1830s to the 1880s, Doniphan was active in a variety of affairs in Missouri and held firm to several underlying principles, including loyalty, hard work, the sanctity of the republic, and commitment to Christian charity. However, the key to Doniphan's importance was his persistent moderation on the critical issues of his day.

Doniphan became a household name when he served as the commanding officer of the famed First Missouri Mounted Volunteers during the Mexican-American War. It was during this time that he won two battles, established an Anglo-American-based democracy in New Mexico, and paved the way for the annexation of the territory that became New Mexico and Arizona. He is also recognized by the Mormons for his assistance to their beleaguered church during Missouri's "Mormon War" and for his refusal to execute Joseph Smith when ordered to do so by his commanding officer.

Although Doniphan was a slaveholding unionist, he sought a middle ground to stave off war in the 1850s and early 1860s and served as a delegate to the Washington Peace Conference in 1861. When conflict escalated along the western border of Missouri in 1862, Doniphan moved to St. Louis, where he worked as a lawyer with the Missouri Claims Commission, seeking pensions for refugees.

Doniphan early adopted the Whig ideal of the "positive liberal state" and sought to use the power of government to remake society into something better. Once he saw the heavy-handed use of state power during Reconstruction, however, Doniphan reversed his views on the role of the government in society. For the rest of his life, he resisted government incursions into the lives of the people and sought to restore a healthy Union.

Roger D. Launius is the Chief Historian of the National Aeronautics and Space Administration in Washington, D.C. He is the author or editor of numerous books, including Joseph Smith III: Pragmatic Prophet, which received the prestigious David W. and Beatrice C. Evans Biography Award.