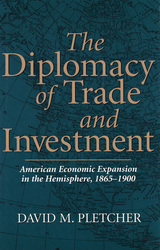 The move to encourage trade with Canada and Mexico during the 1990s, culminating with the negotiation of the North American Free Trade Agreement (NAFTA), has had a long background extending as far back as the late eighteenth century. American trade with both Canada and Latin America rapidly increased during the last third of the nineteenth century as a result of burgeoning industry and agriculture in the United States. The Diplomacy of Trade and Investment is the first detailed examination of the economic and political forces behind this rapid growth and their effect on government policy.

Based on a thorough examination of government documents, congressional debates and reports, private papers of government and business leaders, and newspapers, David M. Pletcher begins this monumental study with a comprehensive survey of U.S. trade following the Civil War. He goes on to outline the problems of building a coherent trade policy toward Canada, Mexico, Central America, the Caribbean, and South America. The study concludes by analyzing a series of abortive trade reform efforts and examining the effects of the Spanish-American War.

Pletcher rejects the long-held belief that American business and government engaged in a deliberate, consistent drive for economic hegemony in the hemisphere during the late 1800s. Instead he finds that the American government improvised and experimented with ways to further trade expansion. But American businessmen were often more interested in domestic trade than in trade with foreign markets. In fact, many of them resisted efforts to lower the American tariff or otherwise encourage American trade abroad.

The combination of traditionalist and revisionist insight with Pletcher's own deep knowledge and research provides the reader with a comprehensive new interpretation of hemispheric trade expansion at the end of the nineteenth century.

David M. Pletcher is the author of several books, including The Diplomacy of Involvement: American Economic Expansion across the Pacific, 1784-1900 (University of Missouri Press) and The Diplomacy of Annexation: Texas, Oregon, and the Mexican War. He received the Albert J. Beveridge Award from the American Historical Association and is Professor Emeritus of History at Indiana University in Bloomington.

"Throughout the text, the blend of factual and statistical data with explanation and historical interpretation makes this a treasure chest for the user. Pletcher knows this historical neighborhood as well as anyone alive, and has previously written about it. He now gives us an invaluable guidebook to the territory."—David Healy


"The book is written with great clarity and energy. It is a judicious argument suitable to the complexity of the subject. . . . In many ways it is this generation's final statement about a long controversial subject."—William H. Becker