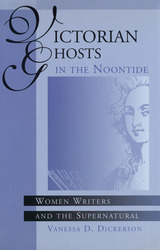 During the nineteenth century, British society was making rapid advancements in science and technology. While the men became materially productive, women were expected to be the fulcrums of society's changes. As one means of adjusting to these changes, many women focused on supernaturalism and spirituality.

In Victorian Ghosts in the Noontide, Vanessa D. Dickerson analyzes women's spirituality in a materialistic age by examining the supernatural fiction of Charlotte and Emily Brontë, Elizabeth Gaskell, and George Eliot and provides interpretive readings of familiar texts like Jane Eyre and Wuthering Heights. Other works by lesser-known authors are also examined.

Technological advances eliminated many of the jobs women were accustomed to doing. This left women looking for their place in society. A sense of "in-betweenness" developed in these women who were now expected to attend not only to the physical but also to the moral and spiritual needs of the family. As an answer to this "in-betweenness" some channeled their power toward the art of writing. Because people in the mid-1800s were so thoroughly engaged in scientific thought and advancements, supernatural folklore and spirituality were disreputable ideas for anyone, especially women, to explore. Ghosts and spirits were tied to old-wives' tales, superstitions, and legends. However, by focusing on these concepts and using fiction as an outlet, women were able to make great strides in being seen and heard. The art of writing functioned as an exploration of their spiritualism in which women discovered expression, freedom, and power.

This perceptive, well-written book will add a new dimension to our understanding of women's supernatural writings of the Victorian era. Scholars of Victorian literature, women's studies, and popular culture will benefit from its insights.

Vanessa D. Dickerson is Associate Professor of English at Rhodes College in Memphis, Tennessee.  She is the editor of Keeping the Victorian House.