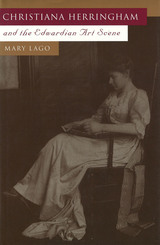 Christiana Herringham (1852-1929), an expert copyist of the Italian Old Masters, was an extraordinary and accomplished woman. Her achievements required a delicate balance, for she had to negotiate old Victorian restrictions in order "to find and fortify a place for herself" in the male-dominated spheres of fine-art administration and public service.

Lady Herringham arrived on the Edwardian art scene with a translation of Il Libro dell' Arte o Trattato della Pittura, Cennini's fifteenth-century handbook on fresco and tempera. It aroused new interest in those techniques and led to the founding of the Society of Painters in Tempera in 1901. To preserve Britain's art heritage from buyers abroad, she provided the money that launched the National Art Collections Fund in 1903, creating what is still a vital and authoritative voice in Britain's cultural life. Her work as the only woman on the NACF's first executive committee prepared her to assist in founding the India Society, which urged respect for indigenous Indian traditions of the fine arts and encouraged appreciation for them in England.

Her concern for undervalued art led her to India to copy the Buddhist wall paintings in the Ajanta caves near Hyderabad. Her copies are the only color record of their condition during those years. Sadly, as she returned from India in 1911, Lady Herringham began to suffer from delusions of pursuit and persecution and withdrew to an asylum, where she remained until her death. There were then no satisfactory explanations for her symptoms, only the Victorian medical premise that insanity was an extension of physical illness.

A distinguished Edwardian scholar, Mary Lago has used her knowledge of the cultural history of the period to bring significant insight into the personal and professional conflicts Lady Herringham faced during a time of limited opportunities for women. Lago also discusses the issue of nationalism in art and the role of colonial imperialism in defining and preserving art. As a postscript, she presents the fascinating possibility that Christiana Herringham's experience may have inspired the character of Mrs. Moore in E. M. Forster's A Passage to India.

Mary Lago is the author and editor of many books, including E. M. Forster: A Literary Life. Professor Emerita of English from the University of Missouri, she lives in Columbia, Missouri.

"Mary Lago's Christiana Herringham and the Edwardian Art Scene recovers an extraordinary wealth of detail about a figure who had almost vanished from history. This is a rare and unusual book by a patient, resourceful, and passionate scholar."--Frances Spalding


"Christiana Herringham and the Edwardian Art Scene is well written and provocative, and has the potential to shed new light on patterns of female philanthropy and art patronage." --Kathleen D. McCarthy