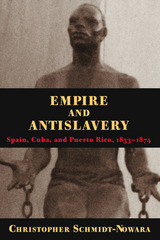 In 1872, there were more than 300,000 slaves in Cuba and Puerto Rico. Though the Spanish government had passed a law for gradual abolition in 1870, slaveowners, particularly in Cuba, clung tenaciously to their slaves as unfree labor was at the core of the colonial economies. Nonetheless, people throughout the Spanish empire fought to abolish slavery, including the Antillean and Spanish liberals and republicans who founded the Spanish Abolitionist Society in 1865. This book is an extensive study of the origins of the Abolitionist Society and its role in the destruction of Cuban and Puerto Rican slavery and the reshaping of colonial politics.
AUTHOR BIOGRAPHY

Christopher Schmidt-Nowara is associate professor of history at Fordham University. He is the author of Empire and Antislavery: Spain, Cuba, and Puerto Rico, 1833-1874 and coeditor, with John Nieto-Phillips, of  Interpreting Spanish Colonialism: Empires, Nations, and Legends.

REVIEWS
"It is a thoroughly researched study that moves beyond the "us-against-them" model that has characterizes much of the earlier scholarship, forcing scholars to recognize a more complex Spain, whose various economic and social actors clashed to produce contradictory and seemingly bizarre colonial policies."
--Colonial Latin American Historical Review