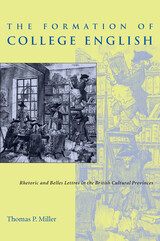 In the middle of the eighteenth century, English literature, composition, and rhetoric were introduced almost simultaneously into colleges throughout the British cultural provinces.  Professorships of rhetoric and belles lettres were established just as print was reaching a growing reading public and efforts were being made to standardize educated taste and usage.  The provinces saw English studies as a means to upward social mobility through cultural assimilation.  In the educational centers of England, however, the introduction of English represented a literacy crisis brought on by provincial institutions that had failed to maintain classical texts and learned languages.

Today, as rhetoric and composition have become reestablished in the humanities in  American colleges, English studies are being broadly transformed by cultural studies, community literacies, and political controversies.  Once again, English departments that are primarily departments of literature see these basic writing courses as a sign of a literacy crisis that is undermining the classics of literature.  The Formation of College English reexamines the civic concerns of rhetoric and the politics that have shaped and continue to shape college English.

AUTHOR BIOGRAPHY
Thomas P. Miller is director of composition at the University of Arizona. He edited the Selected Writings of John Witherspoon and has contributed essays to such journals as Rhetoric Review, Journal of Advanced Composition, Rhetorica, Rhetoric Society Quarterly, and College  English.
REVIEWS
"I first became aware of Tom Miller's work at a 4C's conference . . . At that time I was impressed with the thoroughness of his scholarship and the meticulousness of his research. . . . For my purposes it filled a vacuum that no other work on the history of English studies had done. . . . Miller's book provides a full history of English studies as seen from the viewpoint of scholars stationed at the end of twentieth century and the beginning of the twenty-first. It is an important contribution to the discipline's history."
--Rhetoric Review

TABLE OF CONTENTS
Contents
Acknowledgments,
Introduction. The Teaching of English in the British Cultural Provinces
Some Guiding Assumptions About the Domain of Rhetoric
Blurred Boundaries and Genres
The Formation of College English
Conclusion: The Dialectical Differences Contained Within the Formation of College English
1. The Expansion of the Reading Public, the Standardization of Educated Taste and Usage, and the Essay as Blurred Genre
Publicizing the Literate Culture
Formalizing English
The Essay as Blurred Genre
Readers as Spectators in Civil Society
Conclusion: Reading Publics and Politics
2. The Antiquarianism of the English Universities
A Classical Education Suitable for a Gentleman
Public Change and "Public" Schools
Thomas Warton and the Oxford Professorship of Poetry
John Ward and the Professorship of Rhetoric at Gresham College
Conclusion: “That unprosperous race of men commonly called men of letters”
3. Liberal Education in the Dissenting Academies
The Dissenters' Departure from Classicism
Isaac Watts, Philip Doddridge, and the Teaching of Critical Literacy
Joseph Priestley and the Teaching of English at Warrington Academy
Priestley's Utilitarian Philosophy of Liberal Education and Liberal Political Economy
Scientism, Belletrism, and the Teaching of English in Late Eighteenth-Century Academies
Conclusion: The Rhetoric of Dissent and the Rhetoric of Belles Lettres
4. The King's English and the Classical Tradition in Ireland
English Politics and English Studies in Ireland
Lawson, Leland, and the Professorship of Oratory and History at Trinity
English Studies in Student Societies
English Studies Outside the University: Sheridan and the Elocutionists
Conclusion: English Studies as Contact Zones
5. English Studies Enter the University Curriculum in Scotland
The Moderate Enlightenment in "North Britain"
The Cosmopolitan Perspective of Literary Societies
The Introduction of English —A Literacy Crisis in the Learned Culture?
English Studies Enter the University Curriculum
Conclusion: Belletrism, Scientism, and the Rhetorical Stance of the Spectator
6. Adam Smith and the Rhetoric of a Commercial Society
From Civic Humanism and Natural Law to Civility and Political Economy
Moral Sentiments and the Subordination of Rhetoric to Belles Lettres
The Political Economy of Rhetoric in a "Commercial Society"
Conclusion: Rhetoric’s Displacement by the Transition from Civic Humanism to Laissez-Faire Liberalism
7. Campbell's Philosophy of Rhetoric and the "Science of Man"
The "Science of Man" at Aberdeen
Making a Sense of the Common
The Redefinition of Logic, Rhetoric, and Grammar by the "Science of Man"
Conclusion: The New Rhetoric and the "Science of Man"—As Natural as Common Sense
8. Hugh Blair and the Rhetoric of Belles Lettres
A Rhetoric for a Reading Public
Ancient Rhetoric in Modern Practice: The Proprieties of the Essay
The Ossianic Bard and Belletrism
Belletristic Rhetorical Theory in Political Practice
Conclusion: The Introspective Turn Toward Belletristic Sentiments and the "Science of Man"
9. "'Rhetoric' in Modern Times Really Means 'Criticism'"
The Expansion of Higher Education in Nineteenth-Century England
English Literature and English Politics in the Scottish Universities
From Ancients and Moderns to the Opposition of Literature and Science
Conclusion: The Function of Criticism in Public Education?
Conclusion. Is the History of Classics a Model for the Future of English Departments?
Teaching the British English
From an Historical Perspective,What Then Are the Practical Values of Rhetoric and Composition?
Notes
Works Cited
Index
REQUEST ACCESSIBLE FILE