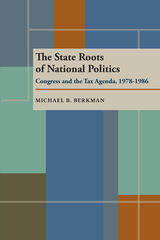 Winner of the William Anderson Award of the American Political Science Association
Explores the role of state politics in shaping the national agenda during the 1980s. By focusing on the federal tax policy from 1978-1986, Berkman argues that a conservative political agenda slowly replaced the liberal agenda dominant since World War II.

The state roots model asserts that national policymakers, particularly members of Congress, are products of their state political systems and environments. Berkman applies this model to the tax-cutting policies that took hold nationally in 1978, before Regan came to office, and continued in the tax acts of 1981 and 1986.

Michael B. Berkman is professor of political science at Pennsylvania State University.

“This is an important, well-written, and carefully reasoned study that takes us beyond the normal compartmentalization so characteristic of the vast majority of American politics studies. In a manner reminiscent of V. O. Key's efforts in Southern Politics (1949), Berkman asks us to consider important linkages between subnational politics and the national political agenda. . . . Undergraduate and graduate students of Congress, the states and policymaking in general have much to gain from Berkman's provocative study.”`
—American Political Science Review


“Michael B. Berkman has written a book that will be of considerable interest and value to students of federalism, economics, public policy, political parties, and legislative politics.  . . . A significant contribution.”
—Journal of Politics


“Berkman artfully reveals the effects regional change and state politics have on national policymaking. . . . His integrative methodology offers a bridge for the difficult linkage between policy analysis, federalism and institutional study.”
—Congress and the Presidency