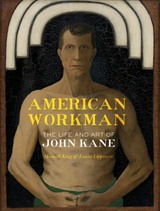 American Workman presents a comprehensive, novel reassessment of the life and work of one of America’s most influential self-taught artists, John Kane. With a full account of Kane’s life as a working man, including his time as a steelworker, coal miner, street paver, and commercial painter in and around Pittsburgh in the early twentieth century, the authors explore how these occupations shaped his development as an artist and his breakthrough success in the modern art world. A rough-and-tumble blue-collar man prone to brawling and drinking, Kane also sought out beauty in the industrial world he inhabited. This Kane paradox—brawny and tough, sensitive and creative—was at the heart of much of the public’s interest in Kane as a person. The allure of the Kane saga was heightened all the more by the fact that he did not achieve renown until he was at the age at which most people are retiring from their professions. Kane’s dedication to painting resulted in a fascinating body of work that has ended up in some of America’s most important museums and private collections. His dramatic life story demonstrates the courage, strength, and creativity of his generation of workmen. They may be long gone, but thanks to Kane they cannot be forgotten.

Maxwell King is the former editor of the Philadelphia Inquirer and president of the Heinz Endowments. He is the author of the poetry collection Crossing Laurel Run and the New York Times-bestselling Mister Rogers biography The Good Neighbor: The Life and Work of Fred Rogers. King also served as chairman of the board of the national Council on Foundations. His most recent job was president of The Pittsburgh Foundation.

Louise Lippincott is a historian and former curator specializing in American and European art from the Enlightenment to the modern era. She focuses on artists outside the mainstream, and the historical contexts that give meaning to their work. As curator of fine arts at Carnegie Museum of Art, she managed the largest John Kane collection in the United States. Previously she occupied curatorial positions at the J. Paul Getty Museum and Philadelphia Museum of Art.


“This reassessment of the life and art of John Kane (1860-1934) sets a new standard for art scholarship. . . . Illustrations make this book a rich experience.” —Maine Antiques Digest

THE LIFE by Maxwell King

Part One: Scotland, steel and the origins of the lifelong wanderings of a man of many parts. How John Kane came to America from Scotland and began a long and extraordinarily varied working life, first in coal and coke, then in steel, railroads and building, all the while patiently honing his skills as an artist. And how his risk-taking, seeking nature took him to many parts of the country and into activities as different as boxing with professionals and patiently teaching himself the skills of a painter and an artist.

Chapter 1: A Boy in Scotland

Chapter 4: A Ranging and Restless Spirit

Part Two: Railroads, strikes, a love affair with paint, marriage to "as pretty a lass as ever came out of Ireland," a peripatetic journey through the land, and earning some real money from art. Wherein, John Kane, grievously injured in an accident, manages to carry on as a workman, an artist, and, now, a family man.

Chapter 7: The Artist as Nomad

Part Three: At last, success; and, with it comes controversy and the overwhelming feeling of getting lost in all the world’s attention. But John Kane, always resilient, now does some of his very best work, just as wealthy collectors and museums compete for his paintings.

THE ART by Louise Lippincott

Part 1: Review of the Field

Chapter 4: Hero’s quest: A workman’s way to the fine arts

Chapter 5: Comedy of errors: A culture clash, a setback, and a tiresome cloud

Chapter 9: Beauty and the Beast: John Kane as a landscape painter