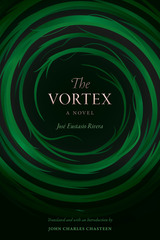 Published in 1924 and widely acknowledged as a major work of twentieth-century Latin American literature, José Eustasio Rivera's The Vortex follows the harrowing adventures of the young poet Arturo Cova and his lover Alicia as they flee Bogotá and head into the wild and woolly backcountry of Colombia. After being separated from Alicia, Arturo leaves the high plains for the jungle, where he witnesses firsthand the horrid conditions of those forced or tricked into tapping rubber trees. A story populated by con men, rubber barons, and the unrelenting landscape, The Vortex is both a denunciation of the sensational human-rights abuses that took place during the Amazonian rubber boom and one of the most famous renderings of the natural environment in Latin American literary history.
AUTHOR BIOGRAPHY
José Eustasio Rivera (1889–1928) was a Colombian poet, novelist, and lawyer. The Vortex is his best-known and most influential work.

John Charles Chasteen is Professor of History at the University of North Carolina, Chapel Hill, and is the author and translator of numerous books.
REVIEWS
"José Eustacio Rivera’s dark and lyrical 1924 masterpiece about a big city poet who ventures into the Amazonian jungle in search of revenge, and instead discovers the horrifying truth about the rubber industry, is a book that operates on multiple levels as a work of art."