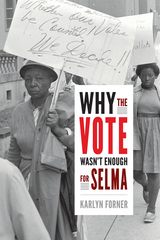 In Why the Vote Wasn't Enough for Selma Karlyn Forner rewrites the heralded story of Selma to explain why gaining the right to vote did not bring about economic justice for African Americans in the Alabama Black Belt. Drawing on a rich array of sources, Forner illustrates how voting rights failed to offset decades of systematic disfranchisement and unequal investment in African American communities. Forner contextualizes Selma as a place, not a moment within the civil rights movement —a place where black citizens' fight for full citizenship unfolded alongside an agricultural shift from cotton farming to cattle raising, the implementation of federal divestment policies, and economic globalization. At the end of the twentieth century, Selma's celebrated political legacy looked worlds apart from the dismal economic realities of the region. Forner demonstrates that voting rights are only part of the story in the black freedom struggle and that economic justice is central to achieving full citizenship.
AUTHOR BIOGRAPHY
Karlyn Forner is Project Manager of the SNCC Digital Gateway at Duke University Libraries.
REVIEWS
"Though the general contours of this story are well known, Forner presents an exhaustive social, political, and economic history of Selma set within local and national context. A near page-turner that will appeal to both general and scholarly readers interested in the civil rights movement."

"Forner argues convincingly that, for many black residents, 'Selma did more for civil rights than civil rights did for Selma.' This lucid, detailed book is often dispiriting to read, but it’s an important reminder of the still-unfulfilled promise of the black freedom movement." (Starred Review)

"This vision of Alabama history is depressing, even tragic, but it can help to reinvigorate our thinking about racial justice in the future. Forner persuasively demonstrates that the economic plight of many black Americans is the direct result of years of racist policies, global labor changes, and a federal government refusing to protect its citizens. Her book reminds us that anything less than a total and complete commitment from the federal government to end institutionalized racism simply leaves in place some problems of the past and enables new and different forms of dispossession to take root."

"Karyln Forner presents a well-researched and accessible contribution. . . . Forner’s work applies a unique and insightful mixture of narrative and content to a much studied topic, making Why the Vote Wasn't Enough for Selma an invaluable educational tool for scholars, teachers, and college students."

"A welcome addition to the growing catalogue of works that have answered the call to take a long but local view of the twentieth-century black freedom struggle. . . . Prodigiously researched, well written, and exhaustive without being exhausting, Why the Vote Wasn’t Enough for Selma deserves a place on as many bookshelves and syllabi as possible."

"Drawing on a rich array of sources from local and state agencies, personal papers, government minutes and census records, oral histories, personal interviews, and newspapers and organizational pamphlets, Forner provides the reader with a complex story and a clear, powerful narrative."

"Forner succeeds in highlighting the consequences of Selma’s tragic racial past and reminds us how much work remains before something approaching equality is reached."

"[This] book is a wonderful contribution to the syllabi of the post-Reconstruction era. It is not so much a history of the Civil Rights Movement in Selma as it is a sweeping account of the ways in which white supremacy was rebuilt and maintained after the Civil War and Reconstruction.... [O]ne leaves this book with a deep appreciation for the pertinacity of white supremacy, locally and nationally. True to her title, Forner has shown why the vote, while necessary, was ultimately insufﬁcient for black Selma."