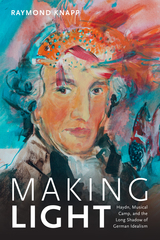 In Making Light Raymond Knapp traces the musical legacy of German Idealism as it led to the declining prestige of composers such as Haydn while influencing the development of American popular music in the nineteenth century. Knapp identifies in Haydn and in early popular American musical cultures such as minstrelsy and operetta a strain of high camp—a mode of engagement that relishes both the superficial and serious aspects of an aesthetic experience—that runs antithetical to German Idealism's musical paradigms. By considering the disservice done to Haydn by German Idealism alongside the emergence of musical camp in American popular music, Knapp outlines a common ground: a humanistically based aesthetic of shared pleasure that points to ways in which camp receptive modes might rejuvenate the original appeal of Haydn's music that has mostly eluded audiences. In so doing, Knapp remaps the historiographical modes and systems of critical evaluation that dominate musicology while troubling the divide between serious and popular music.
AUTHOR BIOGRAPHY
Raymond Knapp is Professor of Musicology and Academic Associate Dean at the Herb Alpert School of Music at the University of California, Los Angeles, the author of The American Musical and the Performance of Personal Identity, and the coeditor of The Oxford Handbook of the American Musical.
REVIEWS
“Making Light will surely spark many fruitful and interesting discussions, and lead to ever clearer and more meaningful ways of looking at performance.”

“As a writer and thinker, Raymond Knapp is a congenial musicologist—eschewing the obscurities of hard theoretical labor and preferring colorful insights. Highly recommended.”

"I recommend Making Light strongly; it is provocative, stimulating and overflowing in original and insightful argument. [Knapp] moves the study of Haydn in a new direction, while developing new ways of understanding how idealistic perspectives on music have shaped the values attached to different forms of music-making."

"A rich and timely study. . . . Readers interested in fresh approaches to Haydn’s catalogue or camp in American musical culture will find Making Light an intriguing study of marginalized musical features across canonic boundaries."