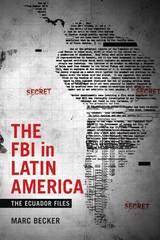 During the Second World War, the FDR administration placed the FBI in charge of political surveillance in Latin America. Through a program called the Special Intelligence Service (SIS), 700 agents were assigned to combat Nazi influence in Mexico, Brazil, Chile, and Argentina. The SIS’s mission, however, extended beyond countries with significant German populations or Nazi spy rings. As evidence of the SIS’s overreach, forty-five agents were dispatched to Ecuador, a country without any German espionage networks. Furthermore, by 1943, FBI director J. Edgar Hoover shifted the SIS’s focus from Nazism to communism. Marc Becker interrogates a trove of FBI documents from its Ecuador mission to uncover the history and purpose of the SIS’s intervention in Latin America and for the light they shed on leftist organizing efforts in Latin America. Ultimately, the FBI’s activities reveal the sustained nature of US imperial ambitions in the Americas.
AUTHOR BIOGRAPHY
Marc Becker is Professor of History at Truman State University and the author of Indians and Leftists in the Making of Ecuador’s Modern Indigenous Movements, also published by Duke University Press, Twentieth-Century Latin American Revolutions, and Pachakutik: Indigenous Movements and Electoral Politics in Ecuador.
REVIEWS
"Becker’s fine study fills a void in the historical record of US-Latin American relations. . . . Highly recommended."

"Becker has done extensive research for this book, and his close examination and analysis of the documentary record left behind by FBI, CIA and State Department surveillance of Ecuador are both apparent and appreciated. . . . This is an interesting, well-researched text."

"An exciting and ambitious effort. Students of Ecuador (and Latin America, more broadly) and US foreign policy, as well as policing and intelligence, will learn a great deal from this book."

"Sourcing is excellent...this book stands as an excellent example of how historians can mine FBI files for information beyond the bureau."

"Highly original and well-researched account . . .   An interesting and detailed history of the mid-century Ecuadorian left."

"This book stands as an excellent example of how historians can mine FBI files for information beyond the bureau."

"A model for the innovative use of primary sources to explore multiple perspectives in history. . . . Becker deftly balances background information with detail and analysis, making the work useful and readable for scholars from many different fields. . . . Essential reading for scholars interested in twentieth-century Ecuadorian history, the history of the Latin American left, or the history of US surveillance in Latin America."

"Marc Becker's The FBI in Latin America adds an important dimension to our understanding of U.S. interventions in Latin America . . . .Becker’s work is an important contribution to the historiography of U.S.-Latin American relations, groundbreaking in the sense that it puts the FBI (not the CIA) at the heart of the earliest intelligence gathering by an agency of the U.S. government."

-- Kenneth Kincaid Against the Current

"The FBI in Latin America is a compelling history that will no doubt spawn similar studies on other countries in the region. Through the use of a fascinating and revealing set of sources, Becker is able to capture a particularly important moment in the emergence of the US as a post-WWII imperial power while simultaneously enriching our understanding of the Latin American left on the eve of its Cold War demise. This well-written book will be of considerable interest to students and scholars of Latin America, US foreign policy, the Cold War, and the political left."