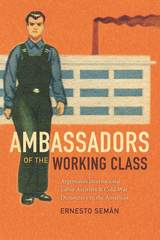 In 1946 Juan Perón launched a populist challenge to the United States, recruiting an army of labor activists to serve as worker attachés at every Argentine embassy. By 1955, over five hundred would serve, representing the largest presence of blue-collar workers in the foreign service of any country in history. A meatpacking union leader taught striking workers in Chicago about rising salaries under Perón. A railroad motorist joined the revolution in Bolivia. A baker showed Soviet workers the daily caloric intake of their Argentine counterparts. As Ambassadors of the Working Class shows, the attachés' struggle against US diplomats in Latin America turned the region into a Cold War battlefield for the hearts of the working classes. In this context, Ernesto Semán reveals, for example, how the attachés' brand of transnational populism offered Fidel Castro and Che Guevara their last chance at mass politics before their embrace of revolutionary violence. Fiercely opposed by Washington, the attachés’ project foundered, but not before US policymakers used their opposition to Peronism to rehearse arguments against the New Deal's legacies.
AUTHOR BIOGRAPHY
Historian Ernesto Semán is Assistant Professor at the Jepson School of Leadership Studies at the University of Richmond and the author of five previous books, which include novels and political essays.
REVIEWS
"In this insightful volume, the author provides a multilevel analysis of the workings and lasting impact of Argentine labor
attachés in the post–World War II era. . . .  Among the many unique contributions of this book is the analysis of how nationalist Perónism became a symbol for domestic and transnational competing visions of liberal democracy and how it was a lens through which US policy makers and elites viewed the legacy of the New Deal. Highly recommended."

"Ambassadors of the Working Class is one of those rare hidden histories that come to light out of the blue to capture the imagination."

"This book will be essential reading for scholars interested in international labor relationships, Peronism, and the ways in which democracy was being debated and redefined in post-World War II Latin America."

“An outstanding piece of scholarship.”

“Ambassadors of the Working Class is an example of the possibilities offered by a truly transnational historical approach, informed by careful research and relevant theoretical frameworks. It opens interesting comparative perspectives with other movements and countries in Latin America, and it should be of interest to scholars and students of Peronism and the Cold World in Latin America.”

"Ambassadors of the Working Class is a terrific story, absorbingly told."

"Ambassadors of the Working Class presents a contradictory and multifaceted Peronism. . . . The timeliness of Semán’s analysis is extraordinary. . . . A powerful antidote to conceptions that do not see anything more in Latin American popular governments than 'totalitarian populism.'"

"Engagingly written, and impressively researched, [Ambassadors of the Working Class] is a major contribution to the history of Peronism, of labour in Latin America, of inter-American relations, and of the Cold War."

"Excellent multinational archival research. . . . Written in accessible and even entertaining style, and solidly grounded in previously untapped primary sources, the book therefore sheds new light not only on Peronism, but more broadly on the international history of the years immediately following the Second World War."

"Semán not only tells a fascinating story but also, by taking seriously the challenge of doing transnational history, should inspire reflection on how global history, when produced from below, can shed light on previously ignored issues. . . . Ambassadors of the Working Class is obligatory reading for anyone interested in global history, the Cold War in Latin America, and, of course, Peronism and populism."