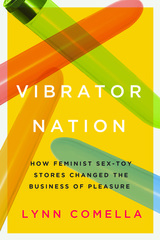 "[A] fascinating survey of the evolving culture of sexuality in America and of a small band of pro-sex feminists who were on the front lines of the sexual revolution."

"[A] worthy exploration into how women have orgasmed their way into sexual liberation."

"An impressive history of feminist sex-toy stores in the US.... Highly recommended. All levels/libraries."