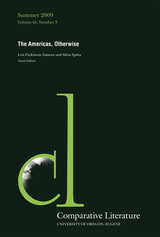 BUY
The Americas, Otherwise, Volume 61
by Lois Parkinson Zamora and Silvia Spitta
Duke University Press
Paper: 978-0-8223-6720-8
“The Americas, Otherwise” explores the growing influence of the study of the Americas—variously referred to as Americas Studies, Transamerican Studies, Hemispheric Studies, and Interamerican Studies—on the field of comparative literature. The essays in this special issue suggest the centrality of comparative studies of the Americas to the revision of the discipline as a whole, as well as to intellectual practice in other disciplines.

These essays foreground the work of important hemispheric writers, artists, and public intellectuals such as Roberto Bolaño, Alejo Carpentier, Aimé Césaire, Gabriel García Márquez, Édouard Glissant, José Martí, Ricardo Piglia, and Leopoldo Zea. Topics include migration to the Americas from Asia, Europe, and Africa; hemispheric exceptionalisms since the establishment of the first colonies; the interdisciplinary foundations of border studies; theories of the neobaroque and their application to Latin American cultural formations; Latino critical theory; and the emergence of a southern theory inclusive of the intellectual work of often-marginalized cultures.