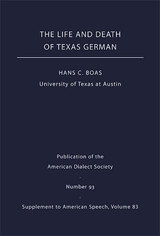 The Life and Death of Texas German
by Hans C. Boas
Duke University Press
Cloth: 978-0-8223-6716-1
This volume presents the first major study of Texas German as spoken in the twenty-first century, focusing on its formation and the linguistic changes it has undergone. This New World dialect, formed more than 150 years ago in German communities in central Texas, is an unusual example of a formerly high-status dialect that declined for sociopolitical reasons. An important case study for dialect research, Texas German is now critically endangered and will probably be extinct by 2050.

By comparing and contrasting present-day data with data from the German dialects brought to Texas since the 1840s, the volume offers an in-depth analysis of mutual interaction between the German-speaking community and English-speaking Texans, long-term accommodation of Texas German speakers in this new community, and language hybridization on the Texas frontier. The volume also analyzes a number of phonological, syntactic, and morphological changes in Texas German over the past century and examines sociolinguistic aspects of the Texas German community from its foundation to today, providing insight into the dynamics underlying new-dialect formation, diglossia, language shift, language maintenance, and language death. Finally, the volume investigates the rapid disappearance of languages, which has global social and cultural implications for areas beyond linguistics.