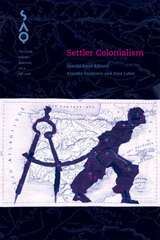 BUY
Settler Colonialism, Volume 107
by Alex Lubin and Alyosha Goldstein
Duke University Press
Paper: 978-0-8223-6706-2
At a time when the Chinese are being labeled the “new colonialists,” this special issue of SAQ revisits the history of settler colonialism in such varied societies as the United States, South Africa, Eritrea, and Palestine/Israel. This issue examines similarities and differences among the diverse historical, geographical, and economic instances of settler colonialism, the practice of colonists moving permanently to a new settlement and, in some instances, growing to outnumber the indigenous inhabitants. Avoiding an oversimplified settler-native dichotomy, contributors engage current debates about the postcolonial to unsettle reductive chronologies of decolonization, addressing how formations of modern settler colonialism, both successful and failed projects (the Italians in Eritrea), compare with more general historical developments of colonial empire.

Essays consider how race, sexuality and gender, and ethnicity shape experiences of settler colonialism, how public and private space are administered, how citizenship laws establish boundaries of national inclusion and exclusion, how religious motives drive settler colonialism, and how settler colonial regimes appropriate and “cleanse” indigenous cultures and histories. One essay investigates the interwoven ideological rationales for cultural pluralism, Zionism, and opposition to empire in the United States prior to World War I, highlighting the seemingly paradoxical call for the support of a Zionist settlement of Israel on grounds that establishing a Jewish state through colonial appropriation paralleled American development. Another contributor argues that white settler colonialism in the United States is articulated within the present-day constellation of neoliberalism and post–civil rights “color-blind” discourse, focusing on the intersections of the U.S. vote against the UN Declaration on the Rights of Indigenous Peoples in 2007, the U.S. Supreme Court ruling on City of Sherrill v. Oneida Indian Nation of New York in 2005, and antisovereignty groups organizing against American Indian self-determination. Another offers the current situation in Darfur as a provocative rendering of postcolonial settler violence.