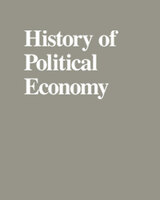 Two of the essays examine the antagonism between Christianity and utilitarianism in postrevolutionary French economics and the rising influence of the materialism of the market vis-à-vis the declining authority of the Roman Catholic Church in eighteenth-century Europe. Other topics explored include the work of the great American neoclassicist Frank Knight, the combination of utility analysis and Christian principles among the “clerical economists” in America, and the effect of a crisis of personal faith on the theories of the English philosopher and economist Henry Sidgwick.