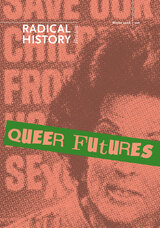 Distinguished by its historical approach, “Queer Futures” examines homonormativity as a phenomenon that emerged in the United States after World War II and gained traction in the 1960s and 1970s. One essay compares Anita Bryant’s antigay campaigns in the late 1970s with those of current same-sex marriage proponents to show how both focus on the abstract figure of the “endangered child.” Another essay explores how the Gay and Lesbian Alliance Against Defamation’s organizational amnesia has shaped its often conservative agenda. Other essays include a Marxist reading of the transsexual body, an examination of reactionary politics at the core of the movement to repeal the U.S. military’s “don’t ask, don’t tell” policy, and a history of how “safe streets” patrols in the 1970s and 1980s became opportunities for urban gentrification and community exploitation.