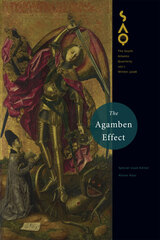 BUY
The Agamben Effect, Volume 107
by Alison Ross
Duke University Press
Paper: 978-0-8223-6684-3
Italian philosopher Giorgio Agamben—whose work has influenced intellectuals in political theory, political philosophy, legal theory, literature, and art—stands among the foremost intellectual figures of the modern era. Engaging with a range of thinkers from Carl Schmitt and Martin Heidegger to Jacques Rancière and Alain Badiou, Agamben considers some of the most pressing issues in recent history and politics. His work explores the relationship between the sovereign state and the politically marginalized Homo Sacer—exiles, refugees, prisoners of war, and others whom the state actively excludes from political participation and full humanity. Further, his critique of the increasing deployment of a “state of exception”—the declaration of a state of emergency that legitimizes the sovereign state’s suspension of law for the public good—as a dominant paradigm for governing has particular power in today’s global political climate.

Infused with the spirit of Agamben’s critical self-reflection, this special issue of SAQ examines his seminal works Homo Sacer (1995), The Open (2002), and State of Exception (2003). Some contributors use Agamben’s work to examine the history of abortion law in the West, the history of slavery, and women’s rights. Others analyze the connections between Agamben’s work and that of his contemporaries, including Jacques Derrida, Slavoj Žižek, and Jean-Luc Nancy. Still other essays identify new points of interdisciplinary communication between some of Agamben’s most provocative ideas and popular twentieth-century writing.