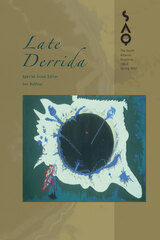 BUY
Late Derrida, Volume 106
by Ian Balfour
Duke University Press
Paper: 978-0-8223-6677-5
This special issue of SAQ commemorates and interrogates—with varying measures of appreciation and critique—the late work of the philosopher Jacques Derrida. Resisting simple memorialization of Derrida since his death in 2004, this collection contends that the late work of this prolific theorist remains to be better understood. The contributors explore the peculiar intensity—a combined sense of both patience and urgency—that characterizes Derrida’s late writing, suggestive, among other things, of his preoccupation with mortality, of time running out, and of so many pressing things to be done.

The essays address a wide array of Derrida’s concerns: human rights, justice, religion, the performative, “the gift of death,” mourning, and sovereignty. They often put Derrida’s texts in conjunction with the works of others—Wordsworth, Agamben, Schelling, and Benjamin, to name a few—that resonate with and on occasion resist Derrida’s own thinking and writing. One essay offers a reading of Wordsworth’s elegy “Distressful gift!” as a dialogue with questions posed by Derrida, using as its frame the kind of nonnormative mourning that Derrida advocated, together with a haunting analysis of the character of survival. Other essays look at Derrida’s theory of performativity as advanced in his late works, continuing his emphasis on the power of language, and in general they emulate his vigilance in attending to force and violence everywhere.