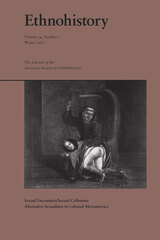 BUY
Sexual Encounters/Sexual Collisions: Alternative Sexualities in Colonial Mesoamerica, Volume 54
edited by Neil L. Whitehead
by John F. Chuchiak, Pete Sigal and Pete Sigal
Duke University Press
Paper: 978-0-8223-6670-6
This special issue of Ethnohistory explores the relationships among sexuality, power, and desire in colonial Mesoamerica. Investigating conflicts over sexuality, the essays illustrate the importance of sexual behaviors and desires in negotiating identities and complex power relations in the Mesoamerican world. Taken together, they make a compelling argument that an understanding of the role of sexuality is as essential to the study of Latin America as is knowledge about political economy, social organization, ethnicity, and gender.

One contributor considers a criminal case in seventeenth-century Mexico that demonstrates that the negotiation of homosexual identity was much more complex than the model of domination and submission often believed to structure Latin American male homosexual relationships. Another contributor examines how priests in Mayan communities attempted to use the confessional and confessional manuals to promote their own notions of sexual desire and ownership of indigenous women, only to have their efforts turned against them, with Mayan women using the texts to assert strategic dominance over the priests. Yet another essay, focusing on the treatment of a hermaphrodite in late colonial Guatemala, examines how the hermaphrodite’s traits undermined or called into question Enlightenment-era ideas about sex and gender.