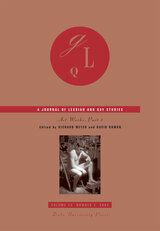 BUY
Art Works: Part 1, Volume 12
by David Román and Richard Meyer
Duke University Press
Paper: 978-0-8223-6651-5
Art Works, Parts 1 and 2 address how art, theater, performance, film, and visual culture have reshaped the established terms of gender and sexuality and contributed to fashioning a queer world. Bringing together work from both the visual and the performing arts, each collection showcases cutting-edge research on a wide range of queer artists, media, and sexual subcultures. The contributors to these issues—scholars in art history, visual culture, theater and performance studies, and film and media studies—approach art not as a reflection of history but as a creative response to it, a response that imagines alternative forms of social, sexual, and creative life.

Arguing for the primacy of the arts in queer life, the contributors show how art and performance can constitute a form of critical theorizing rather than simply an illustration of it. In different ways, each author demonstrates how art works to invigorate queer critique. The first issue includes a special dossier on AIDS activist film and video, marking the twenty-fifth year of the AIDS pandemic, and essays on late-nineteenth-century male nudes, lesbian surrealism, homoerotic photography in the Deep South, and the transnational, transgender contexts of the Pulitzer Prize–winning play I Am My Own Wife. Essays in the second issue focus on a series of queer case studies, including gay power graphics and psychedelia, female duets on the Broadway stage, Keith Haring and racial politics, British Vogue in the 1920s, and lesbian-feminist magazines of the 1970s. The issue concludes with a dossier of three shorter pieces on queer art and performance: an interview with the Chicano drag street performer Robert Legoretta (“Cyclona”), an essay on blogs and the Five Lesbian Brothers, and a discussion of a rarely exhibited work about cruising and public space by the contemporary artist Glenn Ligon.