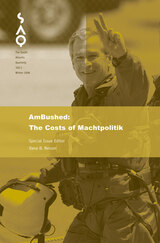 BUY
AmBushed: A Critique of Machtpolitik, Volume 105
by Dana D. Nelson
Duke University Press
Paper: 978-0-8223-6645-4
The 2004 reelection of President George W. Bush came as a shock to many politically liberal American citizens and intellectuals who opposed his first administration and its controversial policies and politics. Aimed at this “amBushed” political constituency, AmBushed, a special issue of SAQ, dares to ask how Bush’s reelection took so many by surprise and—through an analysis of the Bush administration and how it garners political strength and executes its policies—examines the way in which the political Left may regain its footing. The diverse perspectives—from respected intellectuals and scholars from the United States and abroad—reflect a range of opinions within democracy and intend to stimulate a constructive debate, fostering the development of new strategies to strengthen and improve the political agenda and efficacy of the Left.

One essay argues that the Left has ceded its political vision—forgoing active political organization in favor of simply voicing political criticism of the president—allowing its activist sensibilities and abilities to atrophy. Others explore the Bush administration, its masterful machtpolitik (power politics), its strategic feminization of its opposition, its aggressive expansion of executive-branch powers, and its flirtation with what some have labeled American fascism or totalitarianism; still others reflect on how the Left has insulated itself from both reality and politics. A contributor from South Africa draws parallels between apartheid proponents and their tactics and President Bush. Others analyze “Bush II” as the leader of the Christian Right, as a skillful exploiter and manipulator of the mainstream media, as the chief spokesman for “evangelical capitalism,” and as the world’s most powerful lobbyist for corporate interests.