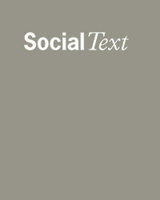 BUY
Palestine in a Transnational Context, Volume 21
by Timothy Mitchell, Ella Shohat and Gyan Prakash
Duke University Press
Paper: 978-0-8223-6584-6
In the three years since the outbreak of the second Intifada in October 2000, the policy-making of the U.S. government has been haunted by the question of Palestine. While the United States has always been allied to and supportive of Israel, since September 11, 2001, its policy has shifted even closer to the Israeli regional agenda.

This special issue places the Palestine question in a transnational and comparative frame that strives to better depict its historical complexity. The issue also gives special consideration to the different modes of Palestinian resistance both within and outside the state of Israel and the occupied territories.