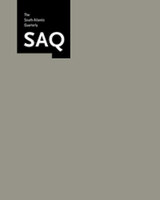 BUY
Palestine America, Volume 102
by Mohammed Bamyeh
Duke University Press
Paper: 978-0-8223-6583-9
In the many decades of the Palestinian-Israeli conflict, the full complexity of that strife has seldom been heard. This special issue of SAQ seeks to intervene by offering a critique of the Palestinian experience. Mapping the complicated relationship among Palestine, the United States, and Israel, this issue includes critical essays on the politics, culture, literature, and history of the Palestinian people.

Bringing together a diverse group of contributors ranging from Roane Carey of the Nation to scholars in Arab, Jewish, and comparative literary studies, this special issue considers Palestinian gender and identity and their relationship to the conflict with Israel as represented in film, literature, and photography. Essays explore the failed peace process, misrepresentations of the Oslo meetings, the devastating effect of continued Israeli occupation of the Palestinian territories, and the growing controversy over the call for U.S. military divestment from Israel.