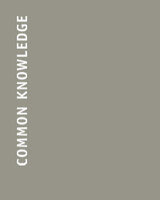 BUY
Peace and Mind: Part 3: Seriatim Symposium on Dispute, Conflict, and Enmity, Volume 8
by Jeffrey M. Perl
Duke University Press
Paper: 978-0-8223-6550-1
Scholars must make their names, assert themselves, take credit for their original work, and stake claims to their positions to achieve credibility in their disciplines. Common Knowledge is dedicated to a mission that is often at odds with this academic protocol. The journal aims to break down boundaries between disciplines, find compromise and common ground, and move beyond dispute. Toward this end, it is publishing an ongoing symposium on dispute, conflict, and enmity titled "Peace and Mind." This third installment of the symposium focuses on a virtue rarely associated with academia: humility. By considering the idea of humility in intellectual work from a variety of perspectives—philosophical, historical, literary, moral, and political—this issue promises to add a surprising new voice to the dialogue on conflict resolution.
One contributor, a longtime president of the American Council of Learned Societies, calls for "intellectual philanthropy" and suggests that academics should transcend their ideological differences and form cooperative partnerships in the public service. A pair of essays, by key figures of the 1989 Velvet Revolution in Eastern Europe, analyze the ways that self-confidence and self-regard undercut efforts toward the resolution of complex social problems. The qualities of ideological self-subversion and even weakness, Common Knowledge maintains, are essential if the intellectual community is to become an agent for peace in a time of war.