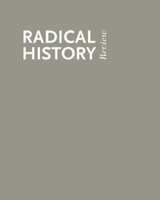 BUY
Radicalisms in Transition, Volume 2002
by Yvonne Lassalle and Mansour Bonakdarian
edited by Yvonne Lassalle
Duke University Press
Paper: 978-0-8223-6522-8
The radicalisms are broadly defined by a resistance to oppression and economic exploitation, as well as by a commitment to social justice and human rights. The transition refers to the various sociohistorical processes that have influenced the practice of politics during the last twenty-five years or so: changes in political structures, in geopolitical alignments, in the organization of the economy, in ideological commitments, and, more generally, in the culture of politics.