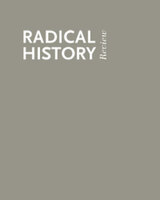 BUY
Thirty Years of Radical History: The Long March, Volume 2001
by Van Gosse
Duke University Press
Paper: 978-0-8223-6493-1
This special issue of Radical History Review (RHR) offers not only a self-portrait of the journal but also a retrospective of radical history as a movement, an ideology, and a transformative force in historical scholarship. In an engaging combination of interviews, articles, and round-table discussions, this issue highlights the relentless challenge that radical history has posed to liberal and conservative paradigms.
Recognizing the creative power of pluralism, the RHR editors have marshalled a diverse troop of historical scholars in this issue. In “Forum on Radical History,” sixteen historians discuss how the notion of radicalism has affected the way they write, teach, and live, and in "A Conversation about the Radical History Review," past and present members of the editorial board zero in on the journal itself and the political and academic context in which it was born. Offering a more personal perspective, Mike Wallace, Pulitzer Prize winner and radical history founder, shares his thoughts on RHR and the movement. Other articles in this special issue tackle the state of radicalism today, analyzing the academic labor movement, the significance of physical space in Pinochet’s reign of terror, and the enduring symbolism of a particular statue in Prague.
This retrospective issue celebrates the journal’s past, but it also reflects on the present and looks forward to a future in which radicalism will continue to shape the landscape of historical and political discourse.