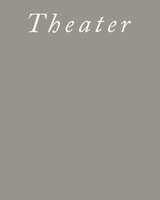 BUY
The Apocalyptic Century, Volume 29
by Elinor Fuchs
Duke University Press
Paper: 978-0-8223-6477-1
Apocalypse, with its promise of millenarian transformation, has been one of the twentieth century’s powerful driving forces, in aesthetics as well as in politics. This special Millennium Issue of Theater offers a radical rethinking of theatrical modernism and the avant-garde in the light of apocalypse—the violent destruction of the old to “Make It New,” as Ezra Pound urged. This major collection of essays and play texts explores how modernist theater both reflected and contributed to the century’s unparalleled social and political upheavals.
Featuring previously unpublished texts and translations by Karl Kraus, Tennessee Williams, Heiner Müller, and David Cole, this collection shows that twentieth-century theater transformed many of the traditional elements of classical apocalyptic literature for modern ends. The volume’s contributors consider playwrights, theories, and movement spanning the past one hundred years, providing a startling new perspective on modern drama from Ibsen and Jarry to Adrienne Kennedy and Tony Kushner.