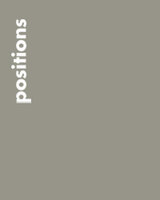 Empires of Hygiene, Volume 6
by Marta Eileen Hanson and Judith Farquhar
Duke University Press
Paper: 978-0-8223-6466-5
Applying critical research on healing and the body to Asian studies, the articles in Empires of Hygiene challenges assumptions about the universality of medical truth. This special issue of positions investigates how medicine, the craft of healing, also acts as a sort of hygiene—a disciplinary agent against the unruly forces of nature and culture. Assuming the complicity of scientific medical practice with forms of domination and exclusion, the contributors not only demonstrate how medicine has been used as a tool of empire but also the ways in which events and institutions have literally transformed bodily life in Asia.
Featuring a variety of topics and methods, essays in Empires of Hygiene compare the disease that is physically suffered to that which is scientifically classified and identified as a social problem. Diseases such as leprosy and STDs, which have biomedical identities in Western settings but in Asia emerge as inseparable from certain colonial regimes, are examined. Spermatorrhea—a disease that compromises the male body’s ability to reproduce—is discussed in relation to the disarray of the Chinese Republic during the mid-twentieth century. The collection also addresses imperial themes of prewar Japan in the literary works of Mori Rintaro and Shimazaki Tison.

REVIEWS
“A clear and instructive introduction by the guest editors Judith Farquhar and Marta Hanson prompts excitement over the fascinating choice of this special issue. . . . This collection of essays truly deserves to become standard reading, not only for students of the historiography of medicine and empire building but also for historians of East Asia in general.” - Sabine Frühstück, Royal Asiatic Society