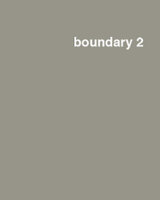 BUY
Edward W. Said, Volume 25
by Paul A. Bové
Duke University Press
Paper: 978-0-8223-6459-7
This volume begins to show why the current period in humanistic studies could be known as "The Age of Edward Said." The collection brings together outstanding intellectuals from the wide variety of fields to which Edward Said, the most important humanist of his generation, has made contributions: literary criticism, postcolonial studies, musicology, Middle Eastern Studies, anthropology, and journalism.

Featured is a new interview with Said, conducted by W. J. T. Mitchell, in which Said discusses the importance of the visual to his thinking, specifically the works of Goya and Caravaggio, which in turn made possible Said's valuable contributions to our understanding of photography and painting. Other contributions reflect on Said's influences on the American public sphere; the subtle personal politics that inform the relationship between music and emotion; Said's importance to a thinking about "race before racism" and the disappearance of the American; and jazz man Jim Merod reflects on Said's "sublime lyrical abstractions."

Covering with insight the many debates Said so deftly entered and formed, the distinguished contributors to this volume reflect upon his oeuvre to create an atmosphere of thoughtfulness, questioning, and interactivity.