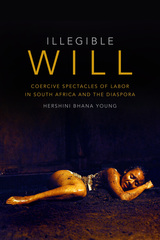 In Illegible Will Hershini Bhana Young engages with the archive of South African and black diasporic performance to examine the absence of black women's will from that archive. Young argues for that will's illegibility, given the paucity of materials outlining the agency of black historical subjects. Drawing on court documents, novels, photographs, historical records, websites, and descriptions of music and dance, Young shows how black will can be conjured through critical imaginings done in concert with historical research. She critically imagines the will of familiar subjects such as Sarah Baartman and that of obscure figures such as the eighteenth-century slave Tryntjie of Madagascar, who was executed in 1713 for attempting to poison her mistress. She also investigates the presence of will in contemporary expressive culture, such as the Miss Landmine Angola beauty pageant, placing it in the long genealogy of the freak show. In these capacious case studies Young situates South African performance within African diasporic circuits of meaning throughout Africa, North America, and South Asia, demonstrating how performative engagement with archival absence can locate that which was never recorded.
AUTHOR BIOGRAPHY
Hershini Bhana Young is Associate Professor of English at the University at Buffalo, State University of New York, and the author of Haunting Capital: Memory, Text, and the Black Diasporic Body.
REVIEWS
"Illegible Will is a phenomenal book that adds intellectual and theoretical sophistication to the fields of African studies, African history, and African diaspora studies. It has great potential to contribute to the related fields of labor studies, sociology, literary studies, and the performing arts. The book is powerfully written and well researched and is well grounded in the existing scholarship."