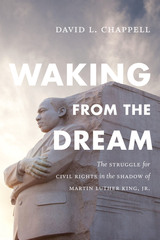 Waking from the Dream: The Struggle for Civil Rights in the Shadow of Martin Luther King, Jr.
by David L. Chappell
Duke University Press, 2016
Paper: 978-0-8223-6172-5
In Waking from the Dream David L. Chappell—whose book A Stone of Hope the Atlantic Monthly called "one of the three or four most important books on the civil rights movement"— provides a sweeping history of the fight to keep the civil rights movement alive following Martin Luther King, Jr.’s assassination. Chappell reveals that, far from coming to an abrupt end with King's death, the civil rights movement continued to work to realize King's vision of an equal society. Entering a new phase where historic victories were no longer within reach, the movement's veterans struggled to rally around common goals; and despite moments where the movement seemed to be on the verge of dissolution, it kept building coalitions, lobbying for legislation, and mobilizing activists. Chappell chronicles five key events of the movement's post-King era: the passage of the Fair Housing Act in 1968; the debates over unity and leadership at the National Black Political Conventions; the campaign for full-employment legislation; the establishment of Martin Luther King, Jr. Day; and Jesse Jackson's quixotic presidential campaigns. With Waking from the Dream, Chappell provides a revealing look into a seldom-studied era of civil rights history, examines King's place in American memory, and explains how a movement labored to overcome the loss of its leader.
AUTHOR BIOGRAPHY
David L. Chappell is Rothbaum Professor of American History at the University of Oklahoma and the author of A Stone of Hope and Inside Agitators.
REVIEWS
-- Kirkus Reviews

2. Can a Movement be Institutionalized? The National Black Political Conventions  28

3. A Coalition for Full Employment  65

4. Legalizing the Legacy: The Battle for a Martin Luther King Holiday  91